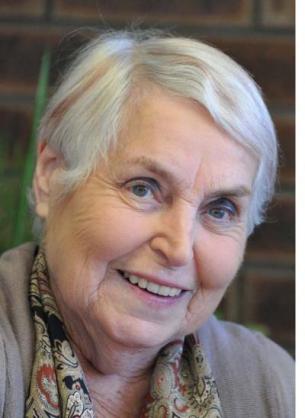 Rhona Dunwoodie’s work was published in The Australian, Free Expression, Positive Words, Majellan and Dawn. Several of her memoirs were read on Radio National Australia.

Rhona was born in the north of England into a large dairy farming family.  She moved to London to study nursing at Mile End Hospital gaining qualifications in general nursing, midwifery and psychiatric nursing. Her career took her to New Zealand and Australia. Rhona moved to Perth, Western Australia in 1965 and resided there until her untimely passing late 2017. Her work with psychiatric patients was a significant influence on her writing. Rhona was a keen calligrapher, and patch worker who exhibited in the Western Australian Quilters yearly exhibition - she is sorely missed by family and friends. Her daughter Kate Ponton has seen her mother's final work through the editorial process with her UK publisher, Olympia.

'Rhona has drawn a really credible character and tackled her defects with humour and sensitivity'.

'The writing is fluent and accessible and conveys very well the complexities of the bipolar condition, the erratic highs and lows, the rebellious and often extreme behaviour. The description of childhood and family relationships is credible and unsentimental. A typical characteristic of the condition is a lack of empathy with those around them which came across very strongly in this narrative. The family doctors and others who interact with Melinda are lightly and softly portrayed but the impact of Melinda's condition on those relationships is made clear. At one point Melinda admits they ‘were not totally sympathetic to the situation; I think they were over emotional …. I trained myself to be impervious to certain feelings and so should they’. This book insightfully and sensitively expresses the difficulties experienced by all those touched by bipolar, and will be of much interest to anyone who has been directly affected by any mental health concerns, as well as being very topical'.

It's All Abut Melinda by Rhona Dunwoodie. her finest work - available from all good bookshops and Amazon/Kindle.

Melinda sits in Dr. Pearson’s consulting rooms. She is outraged, having to listen to the rubbish that this so-called psychiatrist is spouting. From an early age, Melinda has been labelled as ‘difficult’. Her parents and long-suffering brothers have reached their limits, having spent years dealing with the fall-out from her impulsive behaviour during periods of her mania. Refusing to accept her condition, Melinda blames her family, her unfortunate employers, her neighbours, her husband from her short-lived marriage.  The calm and intriguing Helen comes into her life, prompting Melinda to reassess. Will she embrace the support of others? Will she face her demons?