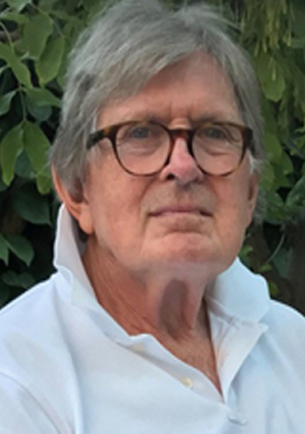 James Wieland has published books on poetry and sporting history, and articles and essays on a variety of literary topics.  He was the foundation editor of Scarp, a literary magazine, and poems have been published in Patterns, Quadrant, Meanjin, Scarp, and Kunapipi,  A former West Australian 100 and 200 metre sprint champion, he lives with his wife, Sally, and Burmese cat Max, by the sea in Western Australia, where he is recovering from a life in academe.  He plays some golf, badly, and drinks good coffee and wine with friends, but, mostly, he writes. He is currently writing a centenary history of the University of Western Australia Boat Club and his first work of adult fiction will be available in 2018.

Michel de Montaigne’s ‘Wherever your life ends … ,’ provides a focus for the novel which, located in character and dealing with contemporary issues, seeks to act out ways of living in the world. Written in lyrical prose, it is the story of Michael O’Connell, a man of great wealth, prestige and entrepreneurial panache who, through the same psychological manipulations, guile, and legerdemain that mark his brilliant career, contrives to contain and retain all who come in touch with him. In action that moves from Australia to London, New Guinea, Edinburgh and Europe, the stories of Michael and the other key characters are explored and revealed through metaphors of abandonment and entrapment, of release and escape. The evocation of Michael’s two ‘loves’ is delicately and beautifully handled, deeply moving NAC’s panel, the first ‘love’ leaving some readers (and, indeed, myself) moved to tears. Simply stunning!

'Octet' was published in August 2018 by Australian Scholarly Publications, Melbourne.

Also available from the following bookstores: -

Or - ask your local book store to order it for you. [N.B. Advise NAC through our ‘Contact Us’ page if the book shop won’t, or say they can’t, order the book for you – give us the date, the person you spoke to, the shop phone number or e-mail address, a brief note of what they said, and your name and phone number, so we may follow up for you]