Born and raised on a dairy farm outside Sydney Dee Doraisamy trained as a teacher. Dee was always fascinated by languages, but says she was very inept at learning them.

Before marrying she moved to London where she worked in a psychiatric practice that focused on children with autism. Much of what she learnt there, and during her travels, was later incorporated in her teaching and writing.

On retirement from a multi-million dollar medical enterprise she travelled to India, where she lived with her husband before returning to Australia eight years later. Here she began further educational training, completing her Master’s Degree in Special Education.

Returning to education, Dee rediscovered her love of writing. Completing her Master’s Degree in Creative Writing at UTS in Sydney in 2011, she has been writing and editing for others ever since.

Her early work with children with autism in the UK and teaching in Australia gives her a unique insight into writing for children, middle grade and young adults, making her the perfect Head of Children's Literature for NAC.

The 'Action Series' of five works for middle grade, boy and girl readers 10-13 years of age.

Chased by a leopard in Tanzania, held at gunpoint in Zagreb, raising orphan animals on the farm of her youth, author Denise Doraisamy has stories to tell - all happened before marrying an ‘exceptional foreigner’, as her family described him. Denise Doraisamy has lived more adventures than friends and family combined and, more to the point, survived to write about them. An author whose candour and authenticity grabs the young (10-13 years age) reader’s  attention, then forces them to read on. Most of the 'action' described in this series is real, taken as it is from the author's personal life experience.

Skiing is fun but can be dangerous as Hugo discovers when he makes his emergency decision to help Sarah survive.

Nothing could have prepared him for what happened as a consequence – nothing.

ACTION DOWN UNDER by Denise Doraisamy

Caving is creepy but falling into the black is terrifying. This only happened after we'd escaped the fire. This one's a cliff-hanger.

Holidays in the outback were supposed to be boring but snakes, cattle duffing and caves changed my mind.  I never knew how much danger lived in the bush. Country life is something else.

Hugo goes to India to discover a temple's history. He gets more than he bargained for, from being lost to seeing an elephant take a terrible revenge. He moves through horror to fun until finally... 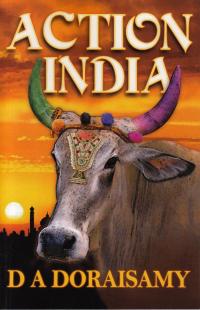 Thirteen-year-old Hugo and his family travel to East Africa for a holiday. Being leopard’s prey, then host to a man-eating bug wasn’t what Hugo (the protagonist), expected. When he encounters a blind boy with an elephant, things get really interesting. Finally, Hugo faces and narrowly escapes a near-death experience, and in doing so, discovers a sense of belonging.